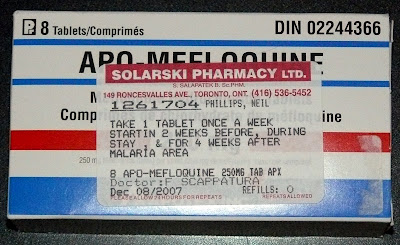 For veteran travellers to malarial areas, the term "Lariam Night" has special meaning. Why? Well for the reasons listed below, we'd take our Lariam at night.

Personally, I've always found it quite entertaining - especially when mixed with a couple drinks to take the edge off. ;-)

Mefloquine is an orally administered antimalarial drug used as a prophylaxis against and treatment for malaira. It also goes by the trade name Lariam® and chemical name mefloquine hydrochloride (formulated with HCl).

The drug is taken once a week starting at least one week prior to entry into malaria endemic areas and continued for 4 weeks after leaving. Owing to the risk of neuropsychiatric disturbance, particularly disruption of sleep, UK advice is for people who have not previously used Mefloquine to start 3 weeks prior to departure; adverse effects usually manifest within one or two weeks, and so there would remain sufficient time to switch to an alternative drug.

Mefloquine may have severe and permanent adverse side-effects. It is known to cause severe depression, anxiety, paranoia, nightmares, insomnia, seizures, peripheral motor-sensory neoropathy, vestibular (balance) damage and central nervous system problems. For a complete list of adverse physical and psychological effects — including suicidal ideation — see the most recent product information. Central nervous system events occur in up to 25% of people taking Lariam, such as dizziness, headache, insomnia, and vivid dreams. In 2002 the word "suicide" was added to the official product label, though proof of causation has not been established. Since 2003, the FDA in the USA has required that patients be screened before mefloquine is prescribed. The latest Consumer Medication Guide to Lariam has more complete information.

In the 1990s there were reports in the media that the drug may have played a role in the Somalia Affair, which involved the torture and murder of a Somali citizen whilst in the custody of Canadian peacekeeping troops. There has been similar controversy since three murder-suicides involving Special Forces soldiers at Fort Bragg, N.C., in the summer of 2002. To date more than 19 cases of vestibular damage following the use of mefloquine have been diagnosed by military physicians. The same damage has been diagnosed among business travelers and tourists.

So if you've read this far, here's the interesting post script. I'm fairly certain that I should have my last Lariam Monday, February 4th. That would be four weeks since returning. But I seem to have taken my last remaining pill last Monday. Hmmm.

Considering the number of mossy bites, especially in Bamako our last two nights, the incubation period of the protozoan parasites, and the fact the half-life of mefloquine can be up to four weeks...the next ten months or so could be an interesting waiting game.