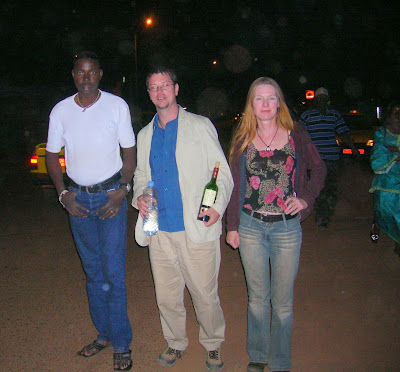 
Dinner Spot Number One was a bit of a disaster. Good music scene, but after six attempts on the menu, no food to be had. Kim & I had splurged 15,000CFA to empty our pockets on a bottle of Bordeaux - what else to do? (Somehow airport shops at midnight did not seem likely.) We ended up walking down the street to the Bla Bla Bar.

The name alone was worth the visit, and it's the hippest space we saw in Mali. I especially liked the colourful plastic bowls taped together to be used as lamps, hanging at odd heights and locations throughout the place. Fantastic roast chicken, too!


Our second taxi dropped us at an, umm, interesting "club". Let's just say NO pics were to be taken. As for the other entertainment, it seemed to be open mic night...Mali Idol, here we come. We left after one beer.


The Pirate Club was apparently the place to be...odd covers upstairs (we arrived to a striking rendition of "Mack the Knife") and a lively disco in the room downstairs. We opted to sit outside, get devoured by mossies (put that Lariam to work, I say - psychotic nights not to be for nought) and watch the rich Bamakoans (?) coming and going.

Video for your entertainment!