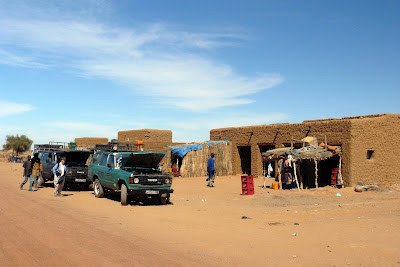 The long drive out of Tombouctou was indeed loooong.

Apart from waiting in Korioume for two or three hours, the drive was relatively quick - inasmuch as "non-stop".

I did not check average speed in the back of our 4x4, but the whole event was like an extended visit to Six Flags. It's one of those few times that I remember what those handles are for - and need them. We tossed and bashed and knocked up against each other endlessly, sun beating down through the windows all the while. Good thing we weren't worried about being too "familiar". My 4x4 had Heather in the front, and Glen, Kim and I in the back. Kim was our patient for this trip, feeling exhausted and more than a little poorly. I'm amazed she managed to sleep during the whole drive - but sleep she did. The three of us decided there's a little feline in her, somewhere. ;-) [Luckily after one good night's sleep she was right as rain.]

This stop was about half-way - while only about 200km, it really felt much longer. Most of the way we were off-road, and all of the bridges were washed out.

At one point our two drivers had a great screaming match, which woke everyone up out of their reverie. Who would have thought: road rage about cutting someone off, when there are no roads and very few other vehicles to be seen!

Heather took a picture when we stopped due to a tyre blow-out, feeling she could just as easily be back home in the Australian outback.

Well, except for the donkey train of about 20-30 animals, all heavily laden with large salt blocks.

Our lunch spot in Douenzta also served as a campground, and being able to strip down and have a quick shower was a delight after all that dust and sand.

In retrospect, I am quite glad I did not end up taking the flight out of Tombouctou...it would not have had the same sense of "journey". 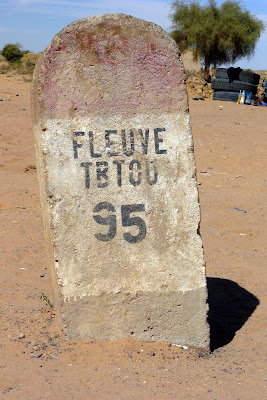 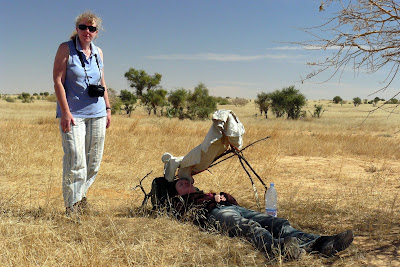 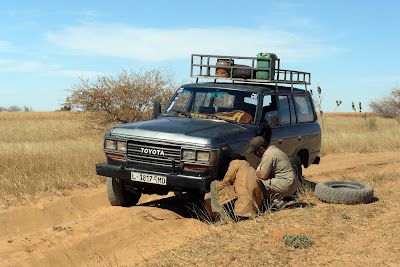