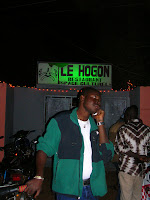 The Holgun is a "famous" nightclub in Bamako. So famous, in fact, that Barou had never been.

Described as "slightly seedy" by LP, it is a sprawling place to catch Malian blues and other traditional music. Many westerners showed up for late Saturday night music, but there was also a large local contingent as well - always a good sign. 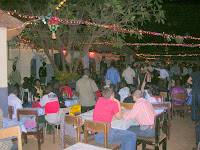 Quite a different feel from the local bar in Segou a few nights back...but eminently enjoyable. [The next night we attempted to find Buffet de la Gare, where the legendary Rail Band started (made up of actual railway workers). Alas, no taxi driver could find it. All was not lost, as we were still dropped at a house of ill repute for "music". Needless to say no pics of that very lcoal establishment! More of an "open mic" night, we didn't stay that long...]

On our way out of Holgun, sure enough who walks in but Toumani Diabaté. A master of the kora (21-string West African harp), Toumani Diabaté has brought the traditional music of his native Mali to the attention of an international audience with a series of well-received albums. Stooped over and walking with the help of a cane, you'd never guess he was only a couple years older than me. We had a quick chat, then he convinced us to join him back inside "for just one song". Alas, we had to leave to drop friends off at the airport, so I'm afraid to say the best I got was his tuning the kora... - sigh -

If you want to get a flavour of the music...click on the below video. (Never mind the visuals, you get a bit of the sound.)