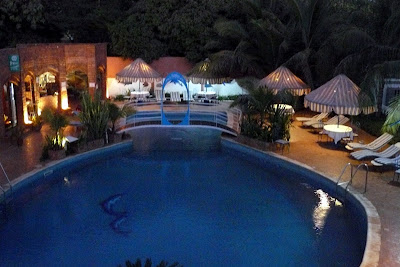 I thought it fitting to include a photo of the very fine hotel in Bamako that was "home base" before and after the trip.

Yes, the pool is as stunning as it looks. A nice moonlight light helps.

On those hot, dusty days after hours wandering the streets of Bamako, it was a most welcome sight, let me tell you.

No surprise, but I still find it intriguing how one's frame of reference can change so quickly.

I arrived in Bamako on December 21 close to midnight. It was a hazy evening, and after the craziness of the airport my taxi staggered through the streets in a somewhat drunken fashion, bobbing and weaving for no apparent reason. (Avoiding police/army checkpoints?) The Rabelais was shut up tight, however a key with my name on it was stuck on the board. The room seemed quite fine. The next day, the city seemed like many other third-world (esp. African) cities, if perhaps poorer: lots of noise, chaotic traffic mixing petrol fumes and animal carts, dirt and tarmacadam, commerce of some sort on every corner. But a "small" city, by capital standards. Not a lot of "conveniences"...restaurants, plush commerce and the like.

After a fortnight, oh what a difference. Bamako was simply worldly, a veritable centre of nightlife and cosmopolitan treats. And the Rabelais? A stunning five-star treat, with a room to match. :-)

While pleased to return home, I know I'll be clinging to that sense of appreciation - and wonderment - as long as possible.

Then again, isn't that why we go?