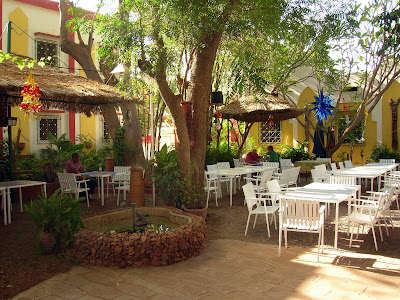 Well now what better thing to do after a couple long journey days?

If you know Neil, you know it will likely involve two things:

2) Night life of some sort.

This beautiful courtyard of our hotel was full of action - and tourists. Owned and run by a French family, it seemed "the" destination (not that there are many). However the overly-loud music and dancing, geared purely for tourists, wasn't quite to my style.
After a brilliant dinner at an Italian restaurant with two pet crocodiles (really, could I make this up?), three of us were in the mood for more - so Barou dropped us off at this little hole in the wall. "Nightclub" would be a bit optimistic a term. Let's say local bar - and indeed very local. The fact that us travellers had crashed the place was welcome in terms of beer sales, but otherwise we were pleasantly tolerated. (With a nod to Cuba as the "band" moved around from table to table at one point to garner a few bills - which we gave happily.)

Heather, Glen and I stayed for an hour or so. It was great fun watching the dancing, the row of children's heads looking over the wall at the action, and young girls who were too young to come in, so would dance around the door (where our table was) and sneak just over the threshold every once in a while.

This video was surreptitiously shot with my small Nikon sitting on the table. (Not quite the same caliber as the BBC crew there the same time.) You will either decide this sounds "fun" or hurts your ears. It may indeed be one of those "had to be there" moments. :-)